a wonderful era of new discovery

European thinking welds itself into the Australian landscape 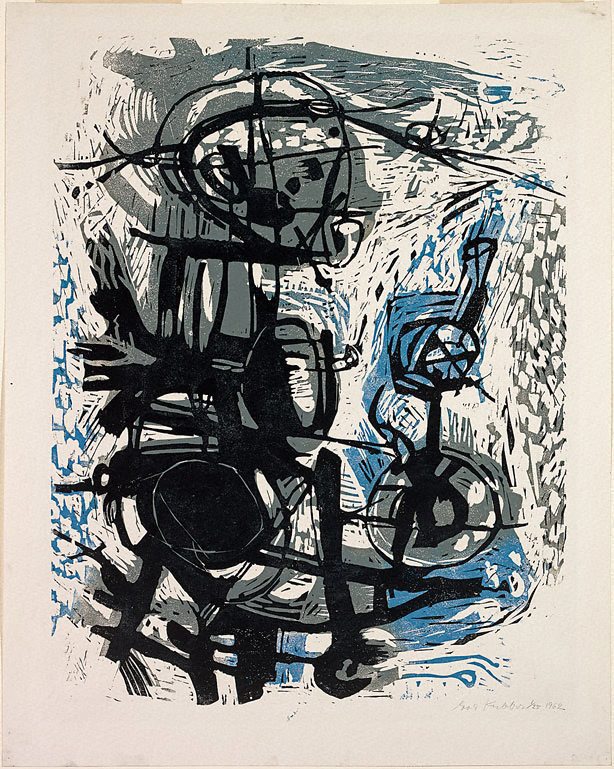 Winner of over 50 awards

As a printmaker and watercolour artist, Eva Kubbos has generated a wonderful collection of powerful colour and attraction to our Australian landscape

From flight to fashion

Kubbos was born into a farming family of six children in Didsilininkai village in the county of Šilute in 1928. Her father died when she was eight. Following his death, the family experienced much hardship, but Kubbos’s childhood memories are filled with the wonders of Nature. She began to draw at an early age.

In 1944, at the end of the eighth year of her education, she fled with her family to escape the advancing Russian army. They settled temporarily in Mittweiden in Northern Germany where she found work with a tailor who, recognising her artistic ability, encouraged her to produce fashion sketches. From 1945 to 1950 she studied at the Hochschule fur Angewandte Kunst (College of Applied Art) in Berlin. 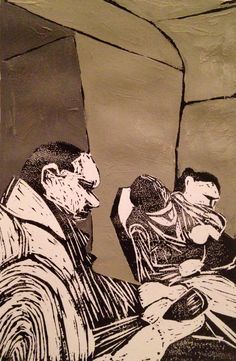 In 1952 she arrived in Australia with her younger sister, Marta. They carried out two-year work contracts at a Shepparton fruit cannery and later, at a Brisbane biscuit factory. On completion of her contract, Kubbos worked in Melbourne as a window-dresser at Cann’s Department Store. In 1955 she gained an award as top window-dresser in Melbourne and was promoted to the position of Advertising Manager.
This encouraged her to continue art studies and in 1956 she enrolled at the Royal Melbourne Institute of Technology and later at Swinburne Technical College to study new techniques in graphic art. In 1958 she exhibited her work — wood and linocuts — for the first time in Australia at the Second Lithuanian Art Exhibition held at the Victorian Artists Society Hall in Melbourne. In 1960 she moved to Sydney, where she met Henry Šalkauskas who was to become her friend and mentor for many years. 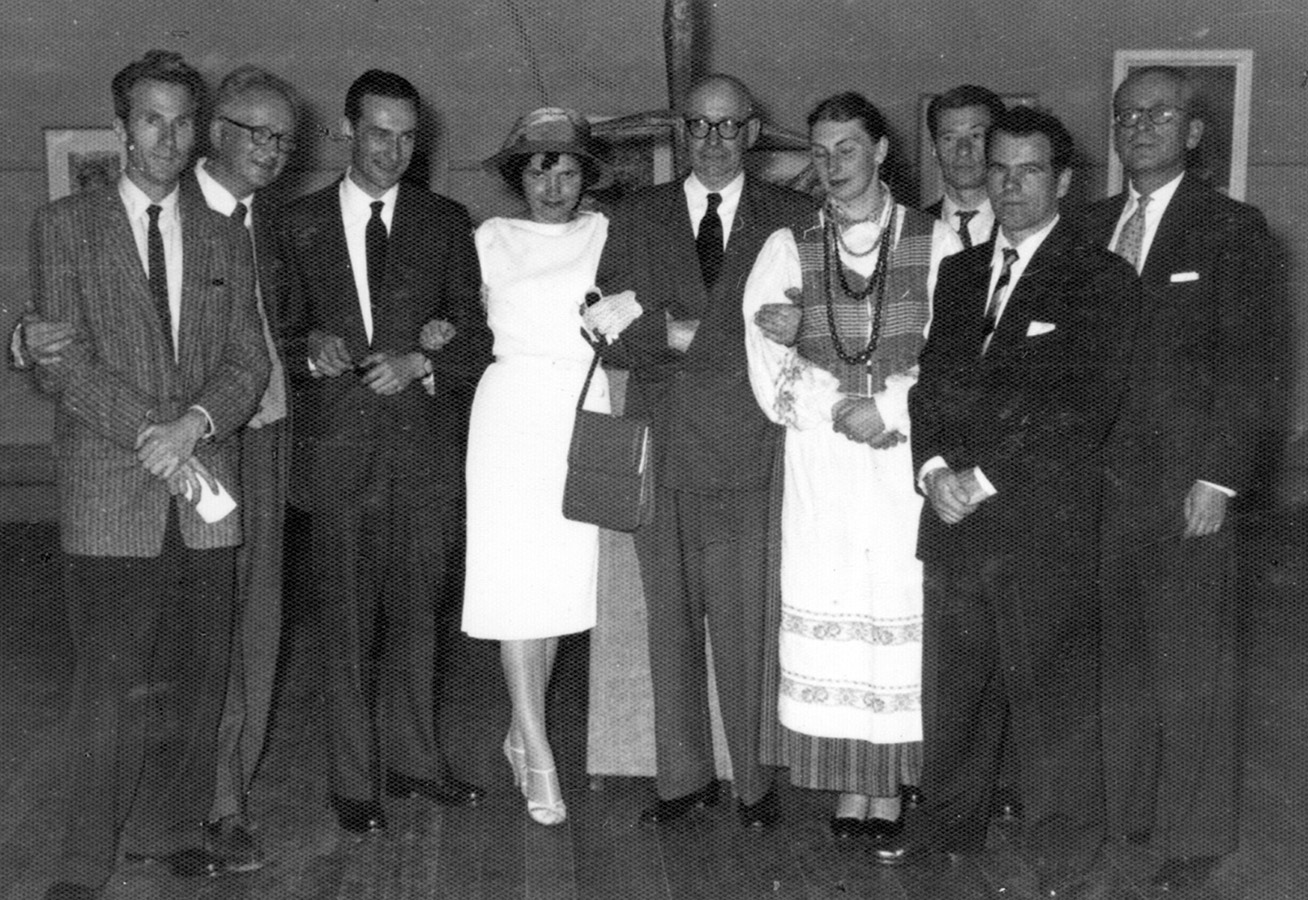 A bond with Oz begins

In Sydney she began to work as a commercial artist with the John Sands Company and remained there for some fifteen years. When she first met Šalkauskas, he was already an executive member of the Contemporary Art Society and he introduced her to the Australian art world as well as to the Sydney Lithuanian community and its artists. Kubbos says, `Sydney supplied me with a certain stimulus an artist needs. Sydney gave me something that I lost after I left Berlin. I suppose this was perhaps the [communication] part with … artists … which I found here, also the very surroundings’.
Kubbos was trained as a graphic artist basically in the German Expressionist style and in the early post-World War II period was exposed briefly to new art movements through art exhibitions that travelled through Europe. Here she saw the work of such artists as Picasso, Chagall, Braque and Kandinsky, but these experiences did not have an immediate effect upon her work. She has said: `I definitely didn’t know what to see in these paintings, and I suppose in my mind all these elements of new art movements must have been rather confusing at that time … I was not aware of so much at that time.’

From graphics to art

Kubbos’s work has undergone great changes in style and media and can be grouped into two periods: 1956-1963, her graphic period; and from 1963 her painting period.
In her graphic period, she remained for some time within the bounds of figurative expressionism, but some of her first woodcuts in Australia, although figurative, are executed in softer style, approaching French post-impressionism more than German expressionism. Her association with avant-garde Sydney artists who were experimenting in abstract expressionism led her to begin to change style and subject matter, working with semi-abstract linoprints and silk screens based on dormant mythological ideas, as in Myth, 1961. In this linoprint, strong lines accentuate the spiritual, indefinable aspects of the myth and reflect the influence of abstract art.

From this experimental period comes an abstract linocut, Untitled, 1962, in which predominantly linear elements, reinforced with solid colour planes, begin to form circular shapes from the apparently amorphous pictorial space. Distribution of geometric shapes and their linkage by broad, decisive lines display a strong, underlying compositional element which in her later paintings is more difficult to discern.

Responding to new ideas, Kubbos searched for new ways of expression, new media and new subject matter. Abstract expressionism emphasised spontaneity and gestural characteristics, and wood and linocuts were not the most suitable media in which to display such features. Kubbos experimented with oil painting but has remained with watercolour, gouache and acrylic, finding that they offer greater possibilities to express spontaneity and immediacy. Most often she uses all three in the same painting: for sombre ideas she uses the more solid and opaque acrylic or gouache; for lighter, ethereal effects, transparent watercolour and its colour veils and layers. Her watercolour paintings are larger than those of most conventional watercolourists, but smaller than Šalkauskas’s paintings. Even in her largest work she is totally in control in organising the picture surface and imbuing it with dramatic tension through the use of bold composition and sensitive tonality. It is not, however, only the formal arrangement which makes her work appealing. Her subject matter – generally myth and landscape are her principal sources of inspiration – also has strong appeal. Kubbos has a pantheistic, mystical concept of the powers of the earth, sun and water, stemming from an upbringing in which these elements were held in great reverence. She expresses in her work an intense feeling towards Nature.
Probably the most important symbol in her work, as also in Šalkauskas’s paintings, is the circle representing the sun. She has said, `The sun really has great significance for me. It goes back partly to my childhood in Lithuania. There were always celebrations — almost pagan, going back for hundreds of years — at midsummer, after the long, cold winters.’

In her work the interaction of the natural elements on which Man’s existence depends assumes a sombre, portentous character as in Morning Coming, circa 1963 In other paintings, the confluence of reminiscences of the past and experiences of the present is in evidence, e.g. in Melting Trunks under the Yellow Sun, 1963, for which she was awarded the Wynne Prize. Dark Summer, 1964, has similar qualities. Of this work, James Gleeson comments: `Dark Summer is an abstraction derived from a very different kind of summer to the ones we normally experience in Australia. Her dark and shuttered forms admit only a little light. It is thin and frail, and it falters through the painting like an invalid clinging to the darkness for support’.
At times Kubbos’s outlook on the forces of Nature mellows and she portrays them with greater benevolence. The dramatic aspects diminish and her paintings become statements of amicable worlds. Her forms become more defined and the paintings are rendered in a lighter colour scale with more tonal nuances, as in After the Rain, 1967.
Of her solo exhibition in Adelaide in 1968, the art critic of the Weekly Times commented: `Kubbos … is concerned with the mystery of life under the earth, which responds to the call of the seasons and the sun, and is forever being born, living and dying … There is poetry in her painting, a love and a worship of this eternal power’.

In 1979 Henry Šalkauskas died. Kubbos, as noted, has described him as her inspiration, but it seems that since his death she has far more completely found herself as an artist. Her work has become more intimate and more locally bound. She presents a more tangible landscape, expressed with strength, sensitivity and jewel-like colours, e.g. Study Coastline, 1980 . Her pictures are structured by building colour layer by layer, as in Landscape, circa 1982. This technique endows her work with a quality of living and pulsating movement as if with pent-up emotional energy waiting to explode.
In the eighties she experimented with juxtaposition of strong, opaque structural elements and subtle translucent colour veils with tonal nuances, e.g. Rhythm of the Surf, 1980. Following her 1981 exhibition in Hobart, artist Paul Boam wrote: `…Another painting which is very expressive is Rhythm of the Surf. A strong dark vertical area dominates the right-hand side of the painting while on the left a series of blue crescent shapes echo the movement of tides and waves. This work contains both the strength and cohesiveness which I felt was occasionally lacking in others.’

One of her strongest paintings of the eighties is The Red Cliffs, 1980. It is partly an illusory mythical landscape drawing upon subconscious memories and reality. Within the powerful composition her opaque gouaches represent the permanency of life forces and are contrasted with the poetry of the moving veils of watercolour, evoking longing for unknown vistas. In other paintings she alludes to the omnipotence of the sun which overpowers the landscape, awakening and stirring Nature, as in Call of Spring, 1980, where bright yet sensitive bands of brilliant colour dominate the strongly constructed painting and eliminate the dark world. Kubbos’s paintings are probably best described by Elwyn Lynn: `Eva Kubbos employs a dark luminosity and her colours tend to look like shadowed sunlight, like gold veiled, even shrouded in black. Floating areas suddenly congeal into solid forms that retain an air of impermanence in the midst of stormy masses. The metaphysical mood, the imminent rain of menace, forms emerging into secret light or wreathed in mists are her concern, but there is no room for woolly romanticism or shadowy subterfuge.’

Kubbos achieved recognition early in her career, receiving for her paintings the prestigious Wynne Prize in 1963, 1970, 1971 and 1979. The Pring Prize, for the `best landscape executed in watercolour by a woman’ was awarded to her eight times between 1970 and 1984.
Art critics, including Gleeson and Pinson, often discuss Kubbos’s work in conjunction with that of Šalkauskas. Gleeson observes: `Both Eva Kubbos and Henry Šalkauskas use an abstract pictorial language to express their feelings, and the nostalgia that is the shaping force behind all their work gives it a recognisable family likeness.’ There is no doubt that there is similarity, mainly because they had the same cultural background, they worked together for almost twenty years and they were both inspired by the forces of Nature and the mythological past. Both admired and were influenced by the great contemporary exponents of abstract expressionism such as Mark Rothko, Jackson Pollock, William Baziotes and Helen Frankenthaler. However, although the works of both Kubbos and Šalkauskas display the freedom of abstract expressionism, Kubbos’s emotional, richly colourful, tangible and more personal works of quicker rhythm differ from Šalkauskas’s majestic, black and grey tonal masses which are static or move only in the slowest of rhythms. Eva Kubbos’s resolute yet sensitive work plays in the Australian landscape painters’ orchestra a new, solemn instrument. 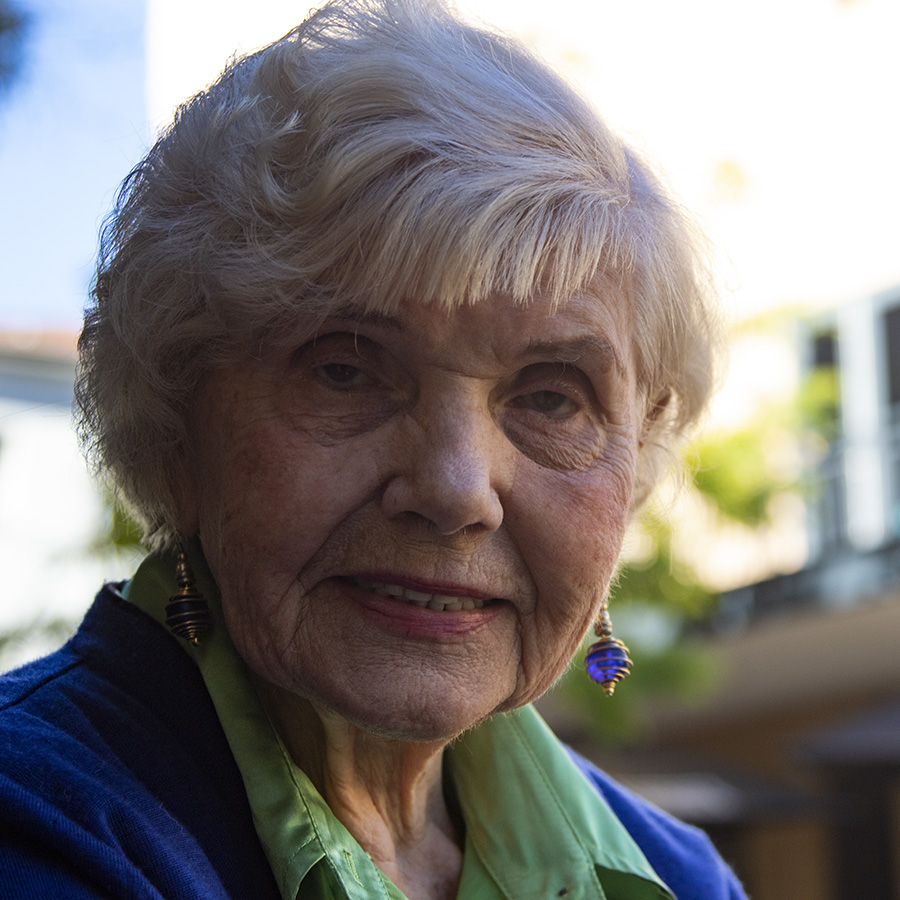 Eva Kubbos, 91 years of age in Kirribilli NSW Australia in 2019 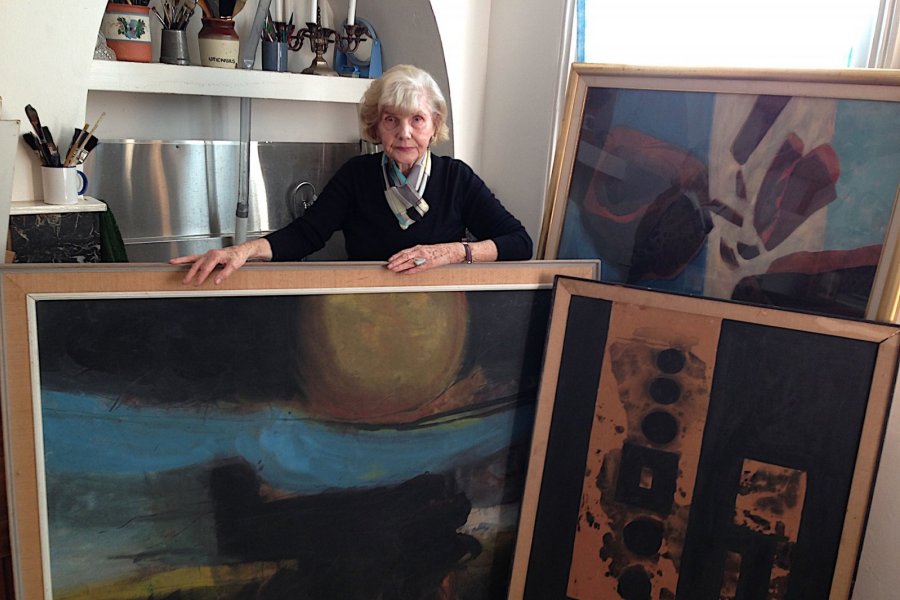 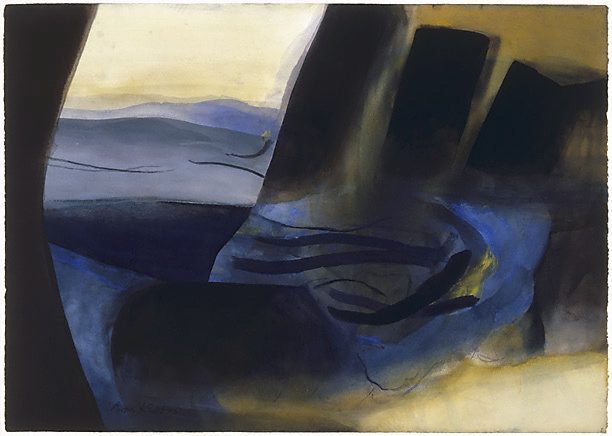 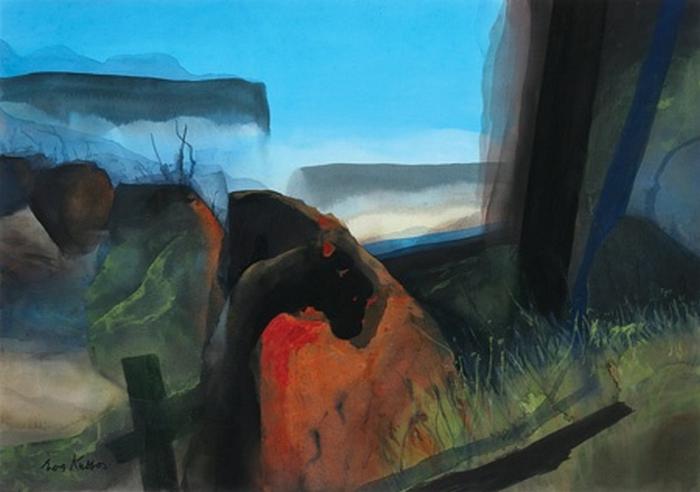 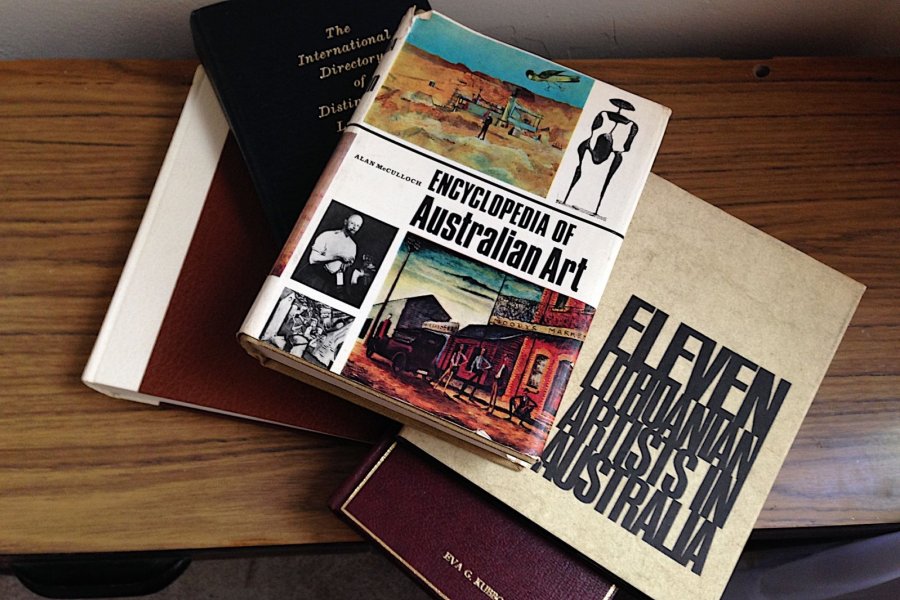