Some Lithuanian Artists you should know about13 February 2019

On February 16th one of the most famous sites in Canada was lit up in the colours of the Lithuanian flag in commemoration of the 70th anniversary of the declaration of  Lithuania’s Freedom!

This declaration was ratified as an act of law on January 12, 1999 by the Seimas (Parliament) of Lithuania. According to the declaration, Lithuania is a democratic republic, and its sovereign government belongs to the Lithuanian nation. Occupation by the Soviet Union contravenes this declaration and all possible means will be employed to reestablish Lithuanian Independence, a goal which all Lithuanians, living in the homeland and abroad, are invited to share.

The Seimas of Lithuania has proclaimed 2019 the year of Jonas Žemaitis-Vytautas, who had the factual role of President of Lithuania during the Freedom Wars.

The event was sponsored by the Lithuanian Embassy in Canada and the Niagara Falls Illumination Board. The Falls were lit in yellow, green and red for 15 minutes at 10 p.m. (5 a.m. Lithuania time). The time being adjusted for weather conditions. 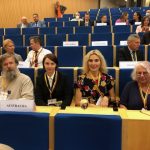